Intrinsic and extrinsic values and goals

In line with self-determination theory, life goals can be differentiated between intrinsic and extrinsic pursuits. According to Grouzet et al. (2005), self-acceptance, affiliation, community feeling, and physical health are common intrinsic goals. They are related to the psychological needs for relatedness, autonomy, and competence, as explained in self-determination theory (Deci & Ryan, 2000; Ryan & Deci, 2000).

Financial success, image, and popularity form typical extrinsic goals aiming at obtaining some external reward or social praise. The search for power and achievement mentioned by Schwartz (1992, 2006) can also be related to the same category of extrinsic goals.

Other dimensions are also used in the literature to structure the organisation of values, such as the Theory of Value Content and Structure (Schwartz, 1992, 2006). In the Theory of Value, prominent dimensions are ‘openness to change’ (hedonism stimulation, self-direction) versus ‘conservation’ (security, conformity, tradition) and ‘self-enhancement’ (achievement, power) versus ‘self-transcendence’ (universalism, benevolence).

Echoing Schwartz’s work, Grouzet et al. (2005) deepened their understanding of life goals by seeking for another fundamental dimension that would complement the intrinsic - extrinsic axis. To this effect, they explored the self-transcendent versus physical dimension. They considered 11 life goals in total to provider a more complete taxonomy of human values (see Table 1).

The study led in 15 different countries was based on the Aspiration Index (Kasser & Ryan, 1993, 2001) to measure goal importance. The main results show that the goals are organised in a circumplex fashion (Fig. 1) with clusters of goals being consistent with each other and opposed to others. The clustering of goals are consistent across different cultures with only slight variations between richer and poorer countries. Notably, financial success was not so much linked to hedonism in poorer countries but rather to safety / physical health and basic welfare of families (affiliation). 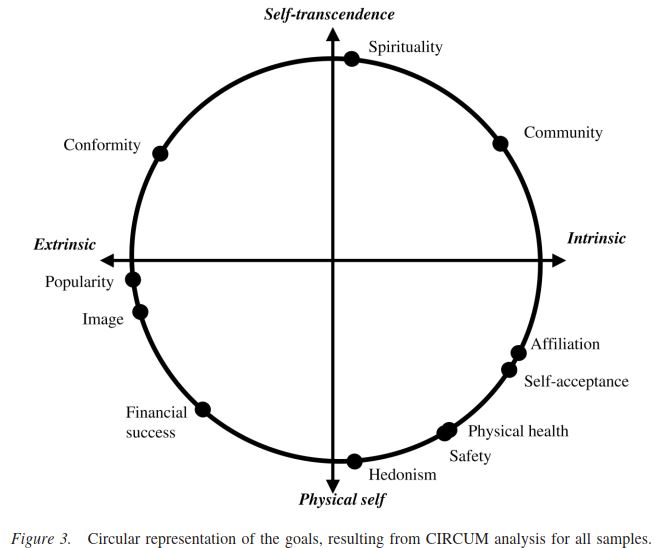 The validity of the first dimension of intrinsic vs. extrinsic goals is confirmed by the analysis. Goals in the intrinsic cluster (community, affiliation, self-acceptance, physical health and safety) are highly consistent with each other and strongly opposed to goals in the extrinsic cluster (financial success, image, popularity and conformity).

The second dimension of caring for one’s physical self (safety and health, bodily pleasures and hedonism, financial success as a material means to achieve those ends) vs. looking for dimensions that transcend the self (benefitting society, taking future generations into account, seeking universal meaning and understanding, as well as matching society’s desires) demonstrated that the goals were in opposition, but the clusters were not as internally consistent as the intrinsic vs. extrinsic ones.

However, even if the distinction between intrinsic vs. extrinsic types of goals has proven to be more robust, this second dimension remains valid and allows to differentiate within the clusters of intrinsic and intrinsic goals the priority given to physical self or self-transcendent aims.

Export
Back to top